Spaces for dialogue in the Sahel

As conflict, insecurity, and instability in the Sahel region have increased, the need for spaces for dialogue, and for reliable, factual, local sources of information, has perhaps never been greater.

Fragile human and economic development processes, political instability, insecurity, inequality and climate change have plunged the Sahel region into a succession of overlapping and mutually reinforcing crises for several years. The result is low economic growth, unemployment, a population explosion, migration, drought, inter-communal violence and violent extremism. Decades of poor governance, inflexible political systems and institutions have also blocked much-needed reforms, discredited public service institutions, and impoverished populations. The effects can be seen in the multiple coups that took place in 2021 and early 2022 in Mali, Chad, Guinea Conakry and Burkina Faso. The situation of the people in the region is not improving and democratic processes are eroding. Freedom of expression and freedom of the press are at risk.

The first victims of these crises are often young people and women, who are under-represented in institutions and intermediary bodies. In 2021, Mali, Niger, Burkina Faso and Chad all ranked in the bottom 15 of 162 countries on the UN Gender Inequality Index.

Climate change is also exacerbating instability. It has significantly altered the living conditions of populations in the Sahel, leading to an increase in the proportion of climate refugees, a trend that seems irreversible. This, in addition to the other factors mentioned above, has caused millions of people to migrate within and beyond their countries’ borders, resulting in human tragedies with considerable social and economic consequences.

A stark reminder of this instability is the triple border between Niger, Burkina and Mali, where violent extremist groups and inter-communal violence ravage local communities. 650 people died as a result of violent incidents in this region in 2021, according to humanitarian organizations and the UN.* This violence is causing a major humanitarian crisis: 5.2 million people were food insecure at the end of 2021, and 2.4 million people in the central Sahel had been forced to leave their homes and become “internally displaced,” including 1.4 million in Burkina Faso.

In this context, the media, whether digital (Internet, social networks) or traditional (radio, television, print), play a key role in informing the population about all these crises, their causes and possible solutions. The media, especially radio stations, are relatively numerous in most Sahel countries. However, they remain fragile and lack resources, especially trained and independent journalists. Their editorial lines often reflect exclusively the opinions of their owners, whether state or private. Whether voluntarily or due to lack of professionalism, they sometimes relay misinformation that circulates online, on social networks, in WhatsApp groups, in towns and villages, and that spreads during crises.

But professional, independent, accountable media whose journalists are trained and equipped to work can help provide reliable, factual information that calms fears and combats rumours — media that create and maintain dialogue and tolerance by exposing people to diverse viewpoints and questioning leaders to hold them accountable. The media can thus play its full role as an intermediary between populations, civil society actors and governments to amplify the voice of citizens at national and regional levels.

With its media in Mali (Studio Tamani), Niger (Studio Kalangou) and Burkina Faso (Studio Yafa), their editorial offices with some 100 trained and supervised journalists and as many correspondents in the regions, their network of 176 local radio and television partners, Fondation Hirondelle has a unique capacity to produce and broadcast information in the Sahel — a network that maintains spaces for daily dialogue that are more necessary than ever between all components of societies in the Sahel. ■ 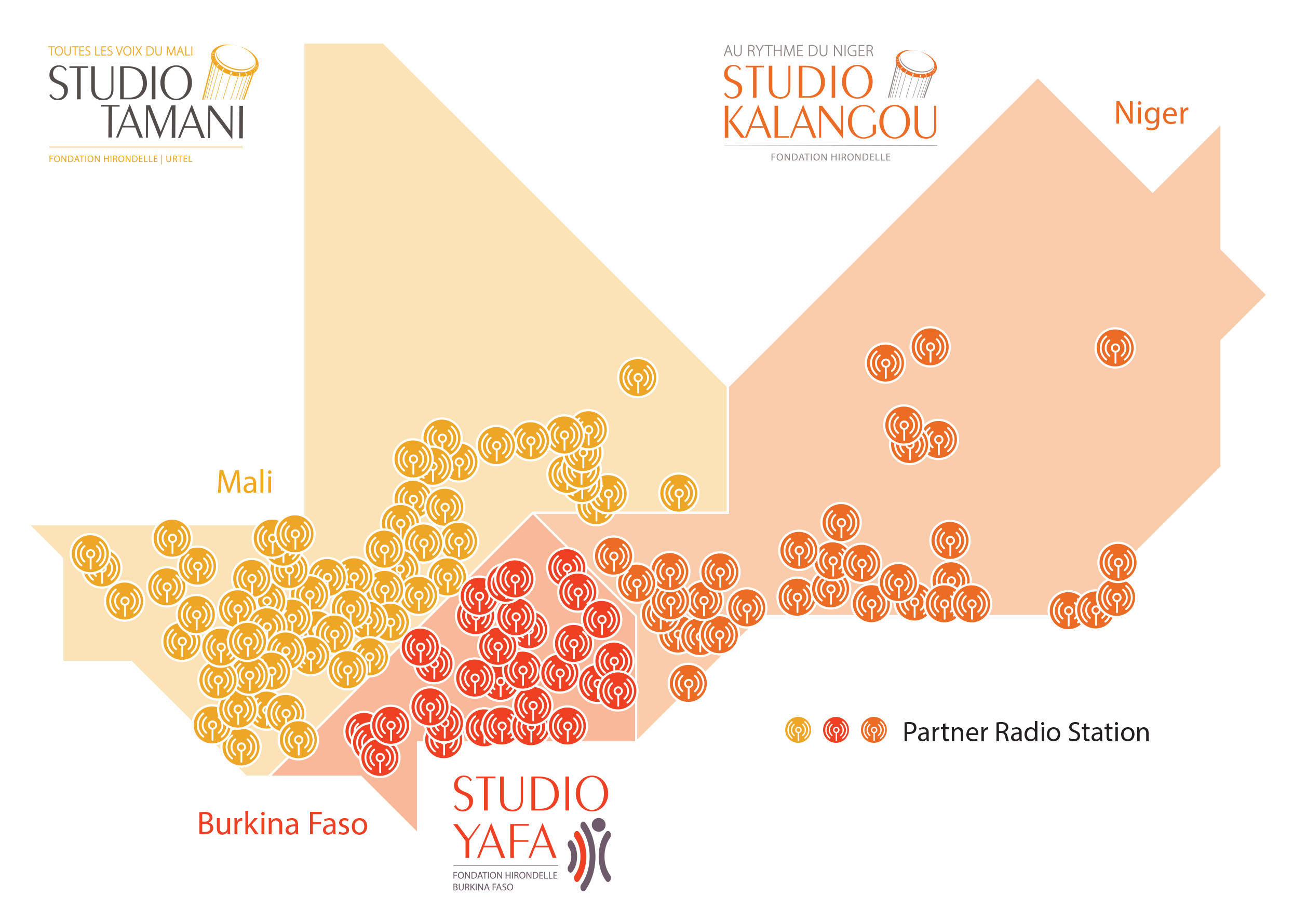 With its media in Mali, Niger and Burkina Faso, and their 176 partner televisions and radio stations, Fondation Hirondelle has a unique capacity to produce and broadcast news in the Sahel.